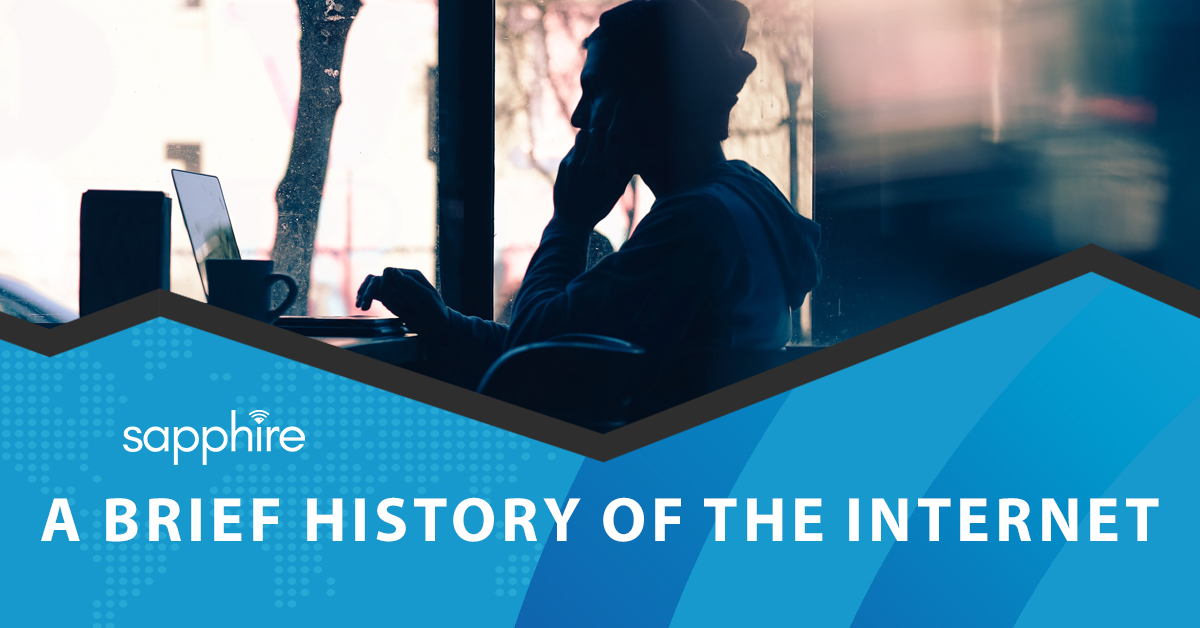 If you can remember a time before the world wide web, you’re one of the few. You’re also probably between the ages of 25-30, which means you’re the last generation to know life before on-demand knowledge and entertainment.

If you were born after about 1999, your life, in some way was affected by the internet, and for everyone moving forward, the internet will continue to influence how we live, communicate, share information, and find entertainment.

In the wake of this, we’re living in a time where one can get online with a wireless internet hotspot device from almost anywhere in the world and connect with anyone else also connected to the internet. This is why Sapphire wants to share a brief history of the internet — to show how being connected is now a necessity and not a luxury.

Back before the internet existed

The initial concept for the internet has been accredited to a handful of different people over the years, but after strenuous debate, Leonard Kleinrock gained the credit. He wrote about U.S. Defense Department’s Advanced Research Project Agency Network (ARPANET) back in 1961, which eventually resulted in how we use the internet now for social media, email, memes, and other information.

Here’s a general timeline of how the internet unfolded:

1965 – Two computers in an MIT lab communicate with one another using what’s called “packet-switching” technology.

1968 – Beranek and Newman, Inc. (BBN) reveals their final version of the Interface Message Process (IMP) and win the government contract from ARPANET.

1973 – University College of London (England) and Royal Radar Establishment (Norway) connect to ARPANET, which marks the birth of the term “internet.”

1974 – First internet service provider (TELENET) is born as a commercial entity to ARPANET.

1974 – The “father’s of the internet,” Bob Kahn and Vinton Cerf publish details on the design of Transmission Control Protocol (TCP).

1982 – TCP and Internet Protocol (IP) is established as the protocol for ARPANET.

1991 – CERN introduces the World Wide Web to the general public.

1992 – “Surfing the web” is coined with the first audio and video files are distributed across the internet.

2009 – The internet celebrates its 40 year anniversary.

2013 – More than half of U.S. adults report they use the internet as their primary banking portal.

The present state of the internet

As of this post, we have voice-activated personal assistants, near unlimited reach across the internet, and the ability to connect with nearly anyone around the world online. You may be wondering: how big is the internet? It was estimated in September 2014 that there were over one-billion websites active online, and it has continued to grow. Approximately 40,000 search queries happen on Google, 6,000 tweets, and more than two-million emails are sent every second.

The internet won’t go away anytime soon, and we don’t think it can even be destroyed. As Blockchain is developed and integrated, our connectivity to one another is only going to grow. That’s why it’s important to be able to connect from anywhere in the world with a wireless internet hotspot device. When you choose Sapphire, you stay connected!