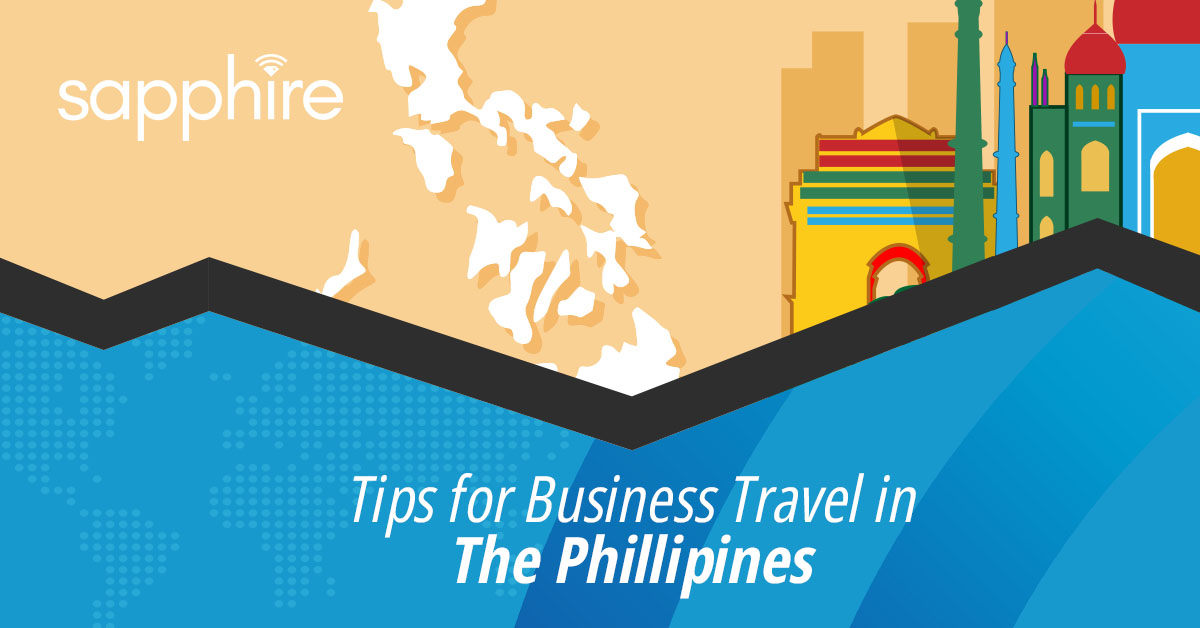 In this blog series, we have been going over key etiquette tips for working in a variety of different countries. In this post, we will go over some guidelines for business travel in the Philippines so you can avoid offending your business colleagues due to a culture gap.

When you are visiting your Filipino colleagues, it’s crucial to establish a good rapport. You will go a long way toward this goal through small talk and long conversations. In addition, you should keep the topics positive and upbeat; being negative may inadvertently cause your colleague to feel embarrassed or uncomfortable. On that note, don’t assume that they are smiling because they approve—a smile is often representative of discomfort or embarrassment. Respect and modesty are very important in this culture, regardless of class, so you should make a point to be gracious when interacting with all people, including the less fortunate. While women are present in the business world, they should avoid being too dominant over male colleagues. In addition, any female manager should project an air of competence and authority while being as restrained as possible.

When greeting your Filipino colleague, expect a firm handshake from the men. Wait for any Filipino business women to extend their hands first. In some cases, they may make eye contact while raising and lowering their eyebrows. This gesture also communicates that you have been understood. It’s typical for close friends of both sexes to hug and hold hands, so don’t be off-put by this gesture of friendship. You can anticipate your colleagues asking a lot of personal questions, such as your marital status or religion. While you don’t have to answer, try to side-step these questions with courtesy.

When making a presentation to your Filipino colleagues, keep in mind that being too direct will be off-putting to them, as they prefer more indirect communication. In addition, you should never raise your voice in a business setting in the Philippines. Your tone of voice should be low and controlled at all times. Take care not to criticize any of your colleagues publicly, as this will have an extremely negative consequence for their reputation in the culture. It’s also very important to be on time when you have a meeting in the Philippines; though that doesn’t necessarily mean that it will start on time, you probably will not be left waiting for long.

It’s typical to have to meet with lower levels of management before you have the opportunity to meet with the key decision makers at an organization. At these different levels, there will be different processes for how things are done, so be sure to be adaptable in this regard. In addition, Filipinos are not focused on quick results. You’re going to need to keep this in mind when it comes to setting deadlines and collaborative decision-making.

In general, westernized gestures are recognized in the Philippines due to the U.S. military presence. That being said, there are some gestures you should avoid. Pointing is considered insulting, so Filipinos usually gesture with an open hand instead. When giving direction, they might nod or purse their lips in a particular direction. Don’t beckon anyone with your index finger; instead, hold your hand out with your palm down and scratch with your fingers. Also, if you are trying to indicate “two” with your fingers, use the ring and little fingers instead of the forefinger and middle finger. They also do not use the thumb when counting numbers on their hand. Finally, avoid putting your hands on your hips in the Philippines because this can be interpreted as you challenging them to a fight.

We hope you are enjoying this blog series about business travel etiquette around the world. Before you jump on your next international flight, make sure that you are equipped with the highest quality MiFi device. At Sapphire, our mobile hotspot device works in more than 100 countries, making it perfect for business travel. Shop Sapphire MIFI today!