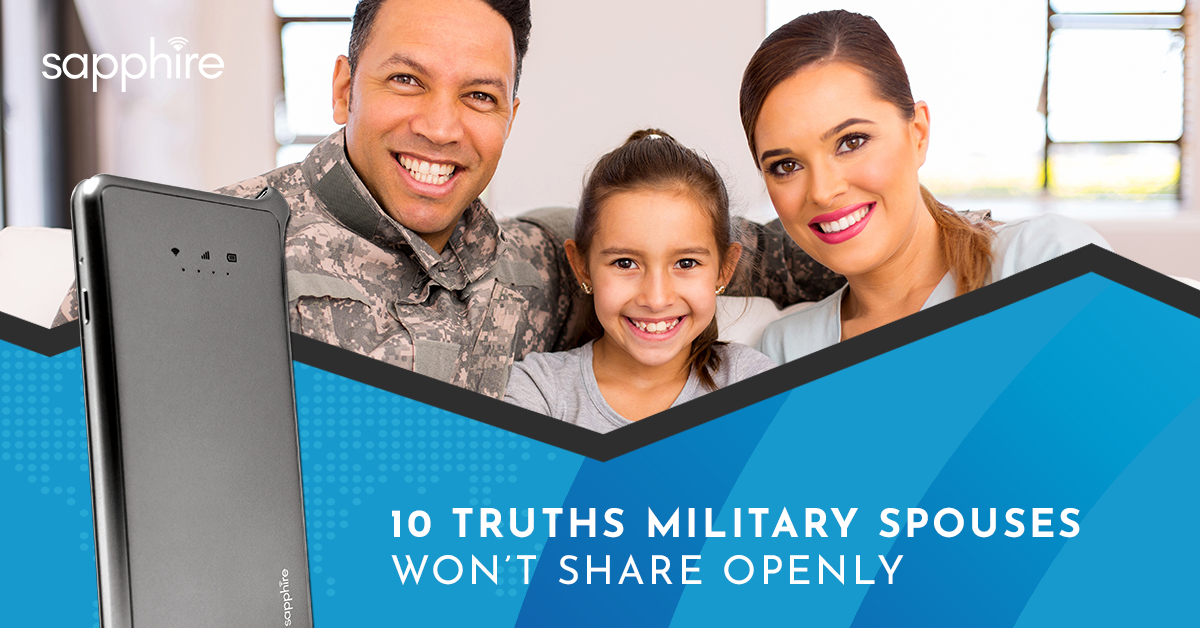 Your spouse has a sense of pride ingrained in their ability to serve their nation — to protect their freedom. This is a glorious character trait to love. However, with everything, there are pros and cons. As a service member, your spouse is committed to protecting our freedoms as citizens. You, as the spouse, will struggle with a number of emotional and physical needs while your spouse is deployed. If you’re feeling alone, hopeless, or simply overwhelmed, Sapphire wants to share 10 secrets military spouses won’t share. Each military spouse has their reasons for keeping these secrets to themselves, but it helps to know that you are not alone in supporting your spouse while they are on deployment.

It’s easier said than done to find the good in the bad. Every day you’re worried that you may get a phone call saying that your spouse served honorably protecting their country. The key to a thriving military marriage is focus on the light, not the darkness, whether things are going well or poorly.

Secret #1. Military Spouses Worry During The Good And Bad Times

It’s a good day when you can speak to your spouse, whether that’s over the internet and face-to-face, or through an email message. But when things go poorly, it’s easy to get lost in the emotional turmoil. The secret military spouses won’t share is that they worry whether it’s a good or bad day. They carry around the emotional weight 24 hours a day, seven days a week.

Whether you think another military spouse is acting distant or does not want your attention, an invite to coffee, lunch, or a movie date is always encouraged. Connection is what they desire on so many different levels, and your friendly outreach can mean the world to them — aside from their spouse arriving home safe.

Pride, duty, and honor all fall under the umbrella of strength. This means military spouses attribute emotional strength to quiet, lone-wolf mentalities. If you or someone you know seems distant, emotionally distraught, or isolated, ask for or to help. Invite them to coffee or lunch. Make an effort to connect so that you and the other person feel less disconnected from the world.

If your spouse were to be deployed, would you be worried that they might not come home? The answer is yes. Military spouses don’t appreciate these types of questions. Instead, they would prefer to feel normal. They want to feel connected to another human. Ask questions about the kids, the neighbors, their favorite shows, and even when they talked to their spouse last. If a military spouse wants to talk about their worry, fear, or anxiety, they will amidst regular conversation. It’s also best to actively listen.

Have you ever felt so stressed about the outcome of a competition, promotion opportunity, or relationship that nothing else mattered? The entire world seemed to fade away except for the answer to the single most important question: “Did I succeed?” Military spouses crave encouragement that they are self-sufficient. They want to hear that their decision to support their spouse is the right one. Verbally saying this or simply giving a hug is usually welcomed.

Your spouses fishing trip in the next state over is not the same thing as a deployment overseas into a military zone. It simply isn’t. It’s best to use common sense and expect a military spouse to take their spouse’s deployment much more seriously than your spouse’s fishing trip. Support and encourage one another.

Secret #7. Military Spouses Take Their Connection To Their Loved One Seriously

Whether it be a phone, a computer, or a tablet, a military spouse’s connection to their spouse is, above all else, priority number one. Expect phone calls to take priority over your conversation or coffee date with them. There’s nothing more valuable to a military spouse than hearing their spouses voice or seeing their face — to know they survived another day.

Secret #8. Military Spouses Accept That It Never Gets Easier

Whether it’s the first or seventh deployment, military spouses accept that it will never get easier sending off their loved one. If you’re struggling with this harsh truth, it’s time to ask for help, find encouragement through support groups, friends, or family, as well as taking the time to wrestle with the fact that this is real.

A military spouse has committed to duty and service, even though they are not overseas. When conversing about faithfulness, love, and commitment, military spouses do not take adultery and other non-faithful activities lightly. Granted, there are a few rotten apples on the tree, but that doesn’t mean the entire tree needs to be cut down.

Not knowing is the hardest pill to swallow when it comes to supporting a service member. Each and every day, the anxiety that weighs on their emotions is due to the uncertainty of their spouse surviving. This is the root of keeping their phones nearby, their family close, and their love for their spouse protected.

Sapphire supports our military troops, and we work to keep them connected with the Sapphire MiFi device. Shop online to send your spouse at home or your deployed service member an international wifi hotspot device.