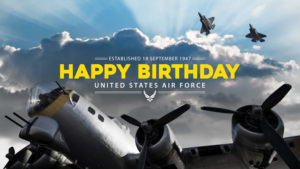 Many people don’t know how extensive the history of the U.S. Air Force really is.  It’s official founding was on September 18, 1947, but it started long before. This year, we’re giving you a brief history lesson on this band of aviators to say Happy Birthday Air Force!

How It All Began

In 1907, the U.S. Army Signal Corps formed the Aeronautical Division which eventually became known as the U.S. Army Air Force. This group was established to lead anything related to air machines, military ballooning and other similar projects only four years after the first flight. 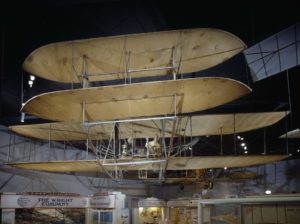 We all know that the invention of flight has changed the course of history.  Who knew that a pair of brothers from North Carolina would successfully achieve this feat in 1903.   After a few years of perfecting flight, the U.S. Army purchased its first aircraft which also happened to be the world’s first military airplane known as the Wright military flyer of 1909. This aircraft could travel with one pilot and one passenger at the speed of 40 mph for just over one hour. By the 1940’s, most fighter planes could travel at speeds up to 400 mph.

Today, fighter jets can reach speeds upwards of 2,000 mph. In fact, the U.S. Air Force has been experimenting with the X-51 which is an unmanned craft that can travel at speeds above Mach 5.  The fastest jet ever recorded is the X-43 actually designed by NASA and in an unmanned flight broke the March 9.6 barrier.

Over the years, the U.S. Air Force has grown significantly and is now the second largest branch. As of 2019, they report the following personnel:

Part of this growth included the acceptance of women into the ranks with pilot training in 1976 followed by navigator training in 1977.  Finally in 1993, women were allowed to enter the fighter pilot training program.  To date, the U.S. Air Force has 775 female pilots, 338 navigators and 236 air battle managers.

Aside from being a military branch, there are quite a few things you might not know about the Air Force:

Members of all military branches are always in need of secure and real time connection to the people and things that matter most.  Proud to serve and be trusted by the U.S. military since 2007, our portable wi-fi hotspots and extensive data plan offerings help our men and women in uniform stay connected.  Learn more at sapphirego.com.